A Military Camp on the big heath

Between 1830 and 1839 Belgium was living under a constant threat of the Netherlands. The ‘Tiendaagse Veldtocht’ (translated: ten-day campaign) of 1831 made this clear. And the refusal of Willem 1 to recognise Belgium confirmed it over eight years. The young Belgian nation needed to expand its military system. Already in 1831 Leopold 1 reorganised the army. For this purpose he had appealed the help of French Officers. One of the elements of the military reorganisation was the expansion of the military camps. These were necessary as training camp and as observation post towards the Netherlands. Camps were build in Diest, Zonhoven, Bouwel and Schilde. These camps didn’t meet completely the purpose they were build for, due to several reasons. So another location was necessary. They needed in the first place lots of space for a big camp with large training grounds, close to the border with the Netherlands. Also the presence of fresh water was an important factor. The Big Heath, north of Beverlo, was selected. In October 1834 Leopold 1 and the French generals Hurel and Magnan made a reconnaissance. They were immediately convinced this was the place to set up a military camp. The location had an important strategic position: close to the Dutch border (at that time Lommel was still part of the Netherlands) and close to the road to Eindhoven – Hasselt – Maastricht. The space was abundant and the poor heathland nearly costed a thing. And more than sufficient water could be pumped up. In May 1835 captain Renard, along with 1100 soldiers, came to the Heath of Beverlo to start major works like:

Slowly an infantry, cavalry and artillery-camp was created, as well as an ambulatory and an engineers-park. There was lodging for 20.000 soldiers. A “palace” for the king and pavilions for the generals were also build. At the end of July 1835 the camp was ready and in August the first 20.000 soldiers came to practice, in the presence of king Leopold I. 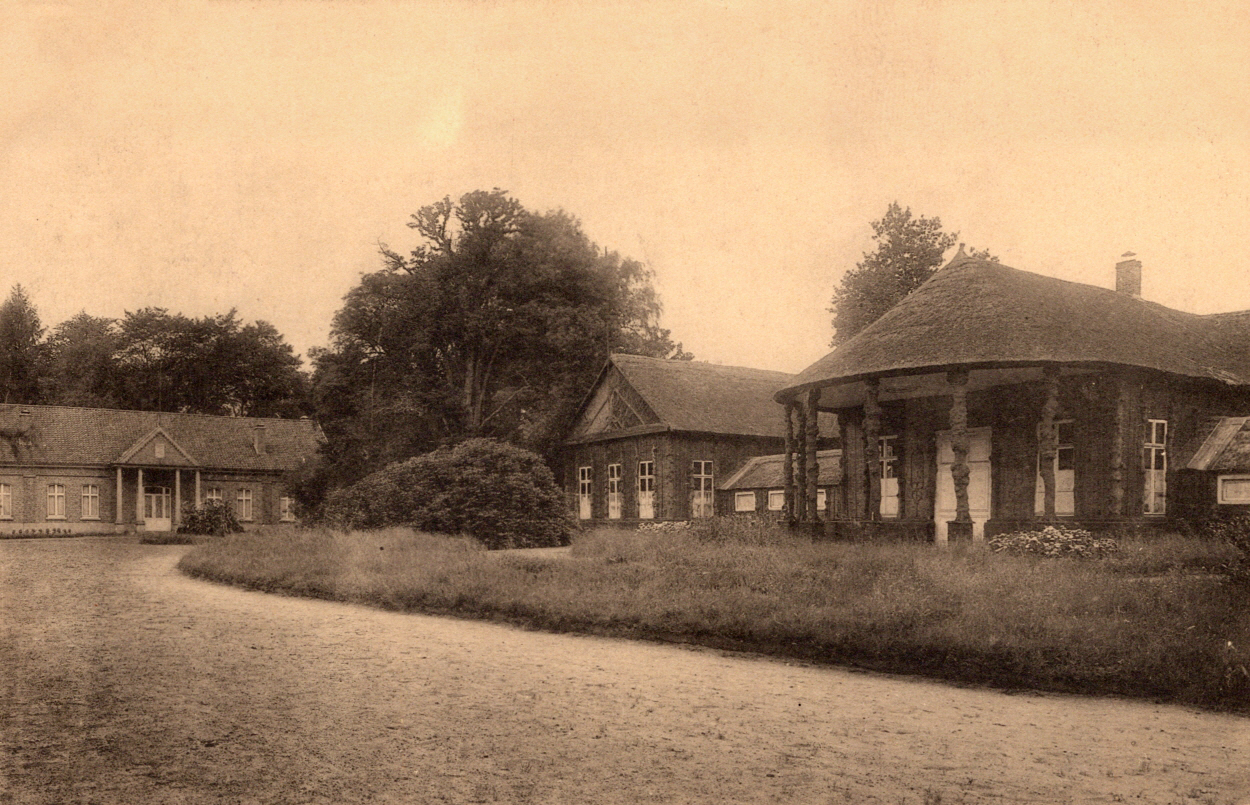 Strong gusts of wind sandstorms and a big huricane caused a lot of damage at the sheds, tents and thatched huts in November 1837. So a new infantry camp was build in 1837, which existed out of 9 “carrés” (squares). Each “carré” was a barrack of 90 meter in quadrangle with a well in the middle. The walls existed out of a low brick wall with a superstructure out of wood and clay. The roofs were covered with straw.

The extension of the final camp

After the peace treaty with the Netherlands in 1839, Pierre Emmanuel Chazal, then Minister of War, decided in 1845 that ‘het Kamp van Beverlo’ (Camp Beverlo) would become a permanent military camp. The buildings would only exist out of decent bricks and fixed materials. One year later he send the Company ‘sans floche’, a discipline company, to the camp to shovel up the sand of the heath until they reached the layer of peat. Also a Royal Park was laid out, which had lots of avenues surrounded by trees.

The civilians who lived in the camp went to the cavalry camp to collect the horse manure and started to grow plants and potatoes.

The military hospital, which was build around 1848, existed out of several pavilions. At that time this hospital was the first and the most modern of its kind in Europe.

Around 1850 the construction of the final camp was started. Inside the infantry camp eight sections were made who offered place to 2.500 soldiers.

Also important logistic installations were build: a bakery with the capacity of 6.000 breads a day, a butchers’, a slaughterhouse and showers with a capacity of 6.500 bathers a day. Even a military narrow-gauge railway with 115 km of tracks throughout the camp was constructed. With this it was easy to transport soldiers and material. The railroad equipment and trains came out of the workshop of the French engineer Paul Decauville. 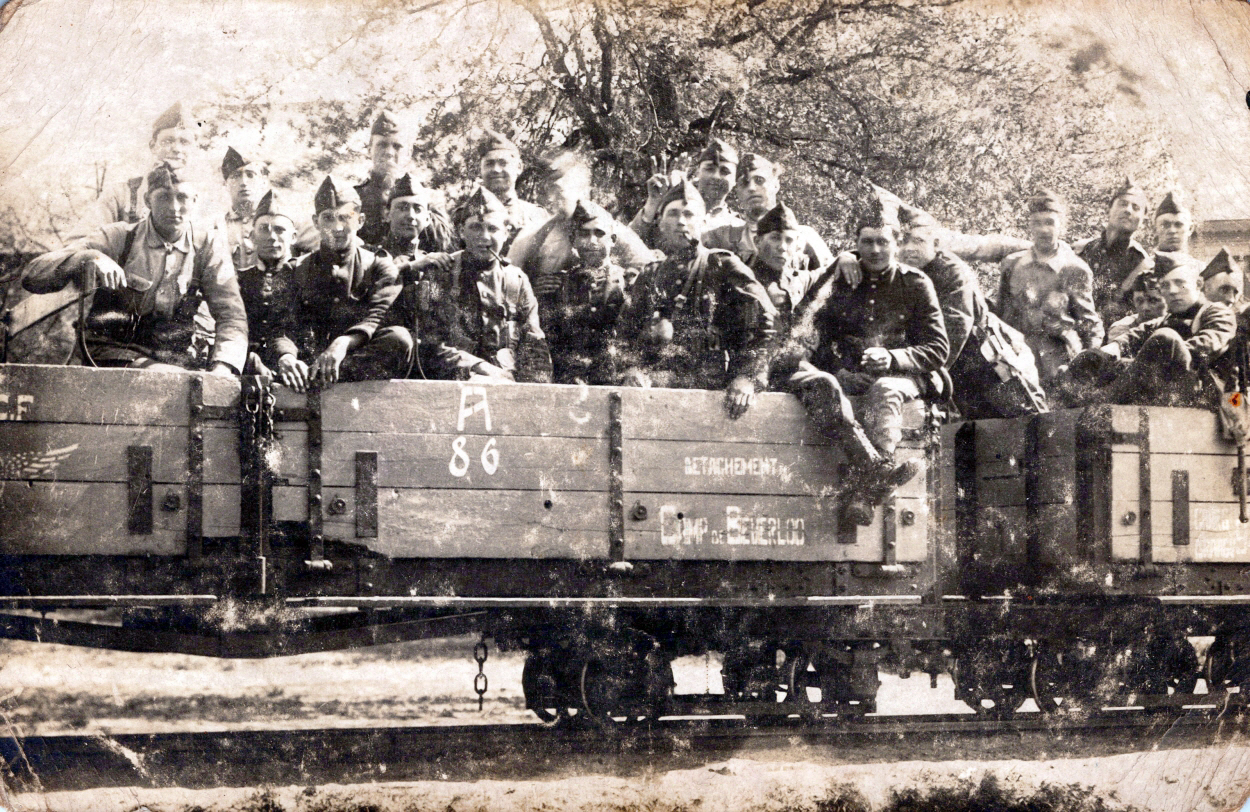 Transport of personnel via the narrow-gauge railway

The modernization reached its peak in 1913 when the construction of several big mess halls started, for the first time they were equipped with electricity and central heating. When World War I broke loose, they were working on providing the whole camp with electricity.

After the German invasion of Belgium and the heavy fights of our troops during the siege of Liège, the battle of the Zilveren Helmen (translated: Silver Helmets) in Halen and the siege of Antwerp, the Belgian Army retreated behind the river Ijzer. During their pursuit of the Belgians, the Germans let North Limburg unoccupied (only a few patrols of cavalry took place). General De Schepper, former commanding officer of the 11th Linie Regiment in Hasselt, was recalled as military governor of Limburg, during the German invasion. With a little group of about 300 gendarmes and volunteers, he continued his ‘little war’, using guerrilla-activities against the German’ Uhlanen’ and ‘Husaren’. He had his headquarters in Leopoldsburg, in the former hotel Legentil (now lounge café Beauregard II). In October 1914 he had to quit his fight and he had him and his squad disarmed in the Netherlands. 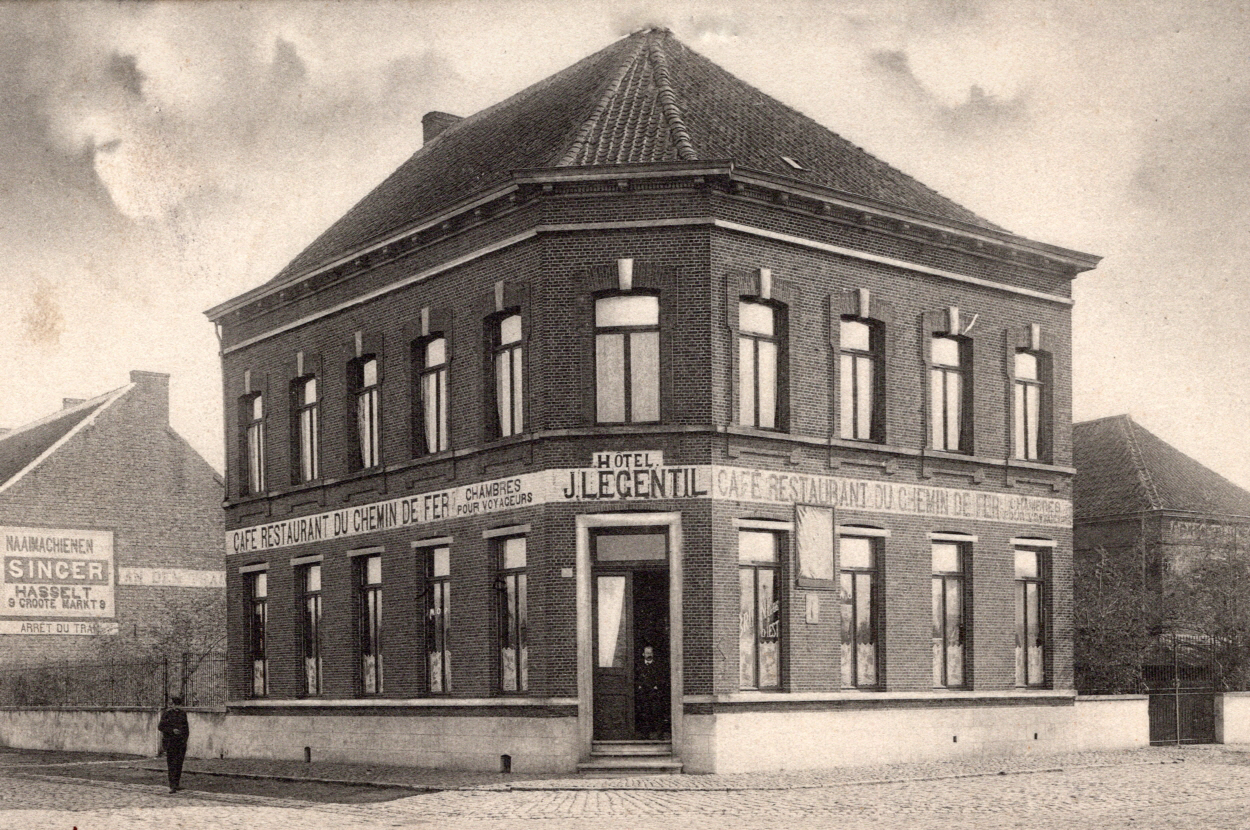 The Germans installed their-selves in the camp, as if they would stay forever. New buildings were constructed and they did the jobs the Belgians had scheduled. Upon their departure in 1918, electricity was installed in the whole camp. A lot less pleasant were the test of the first chemical weapons. In the camp chlorine gas was tested for the very first time (read more in this article). Later the Germans used this gas at the river Ijzer, causing the death of thousands of soldiers. 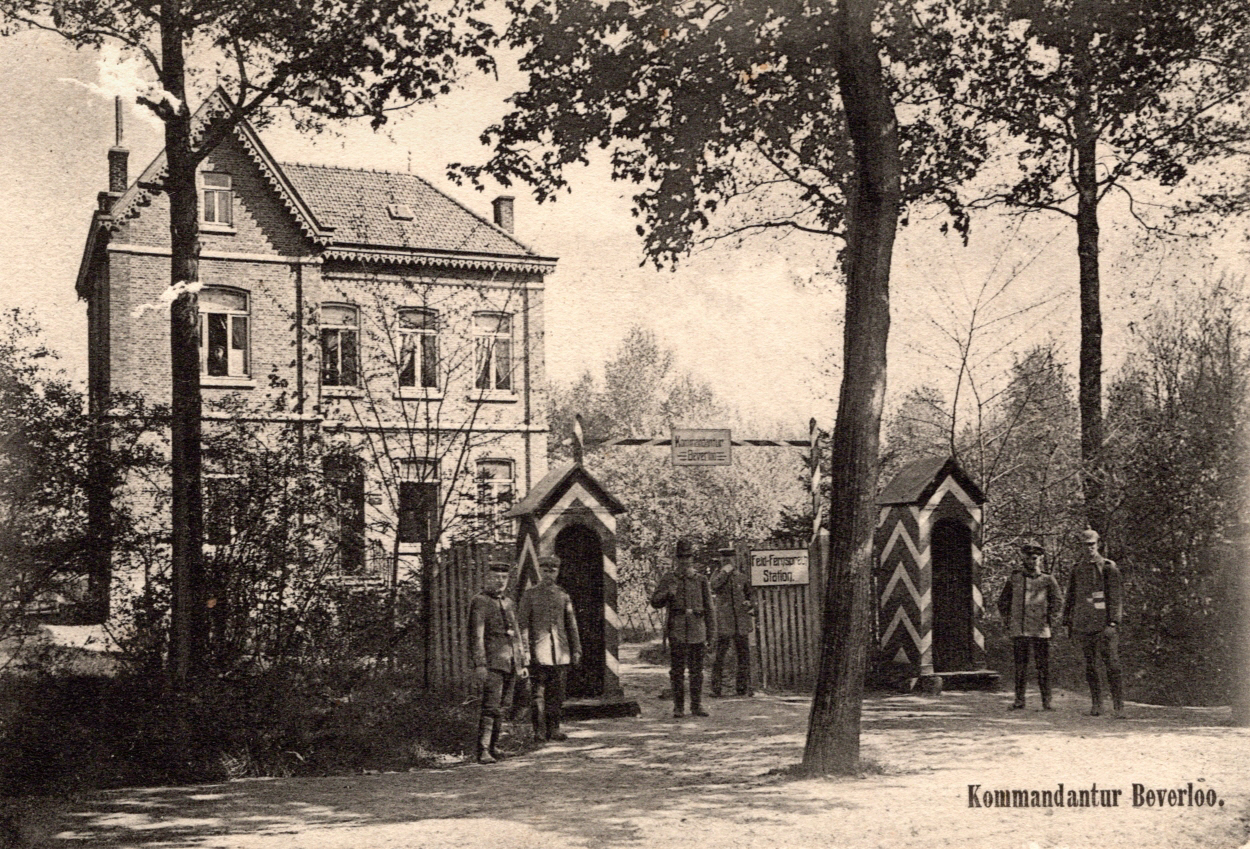 Just before the First World War Camp Beverlo’ had developed into the largest and most modern military camp of Europe. It had barracks for 40.000 soldiers and 4.000 horses, very large mess halls, large practice fields and shooting ranges. From every garrison day’s marches were held to Camp Beverlo’. From Ostend, Bruges, Ghent, Antwerp, Brussels, Charleroi and Liège. Every year they put in at the same bivouacs and marched triumphant into Leopoldsburg and Camp Beverlo, with their band at the head of the troops.

When a cavalry regiment with their band entered Leopoldsburg, the whole population came out on the streets to enjoy the spectacle.

At night Leopoldsburg became crowded out: soldiers went to one of the numerous pubs to slake one’s thirst. In some pubs an orchestra was playing and soldiers were even allowed on stage to sing a song. Camp Beverlo was one of the best known places in Belgium. In every family was someone who had done his five-week camp over there. From generation to generation people spoke about: the bitter cold and the icy north-east wind, the broiling days and the biting sandstorms, the shooting competitions and the food: ‘stoemp’ (dialect for mashed potatoes) and ‘boeletter’ (dialect for meatballs). Wildest rumours were spread about the plenty pubs, the pretty girls and the ‘kaberdoeskes’ (=cabarets. Such a cabaret had in big cities very often the house number 12. That is why in French is spoken of cabaret-douze (translated: cabaret-twelve) and in plainly Flemish ‘Kaberdoeske’) on Konterket… 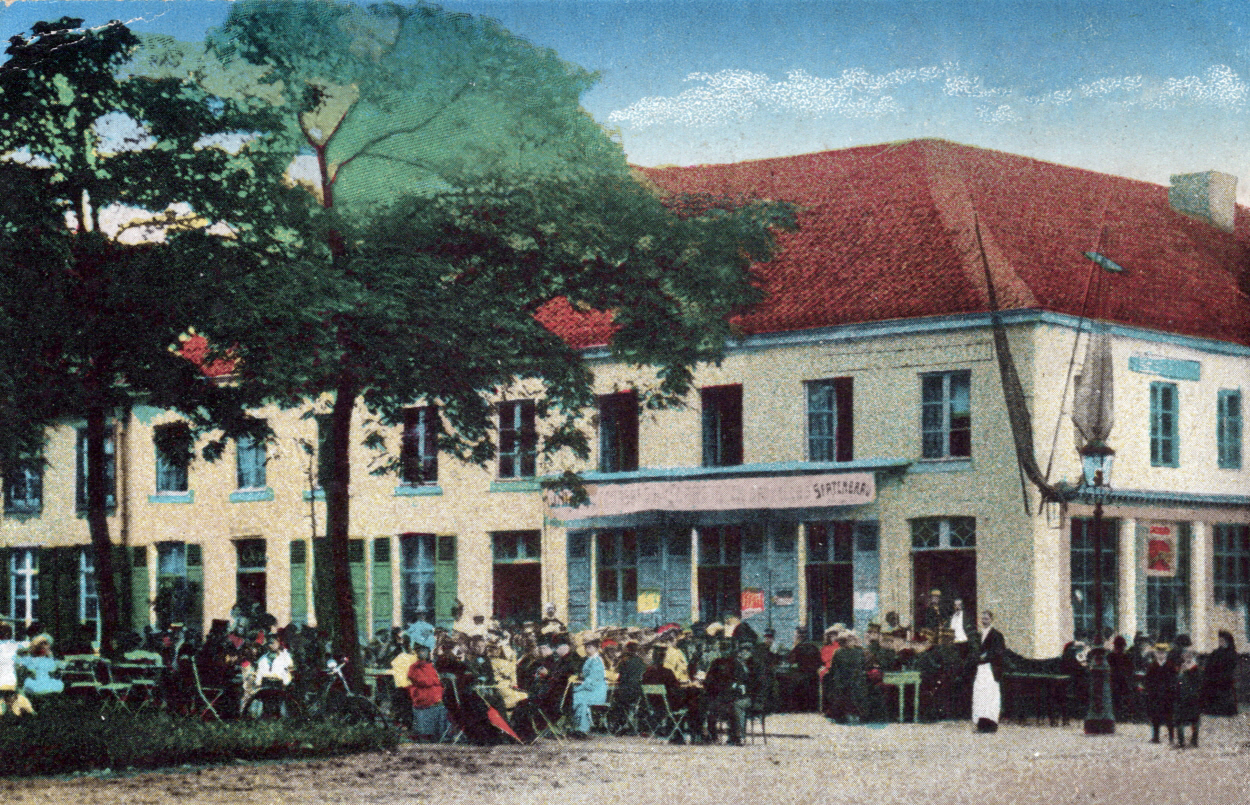 Already on May 10 1940 the first bombs fell on the Infantry-school and on the ‘Compagnie Sans Floche’. Some soldiers, who had staid behind, were killed.

The German occupation had no appreciable intigues and the camp was (fortunately) spared of bombardments.

From October 1942 until November 1943 204 men, of whom 176 were acknowledged to be of the resistance, were execute in an desolate place in the ‘Gemeentebos’ (translated: wood of the village) by a German firing squad. The victims were brought from prison all over the nation and were buried at the spot.

On May 12 1944 the Allied Forces bomb Camp Beverlo. Due to a mistake the Zuidstraat in Beverlo was completely demolished. This caused 77 dead under the civilian population.

On May 28 1944 the Allied planes returned and flattened the entire Infantry-camp. This time hundreds were killed, mainly German soldiers. 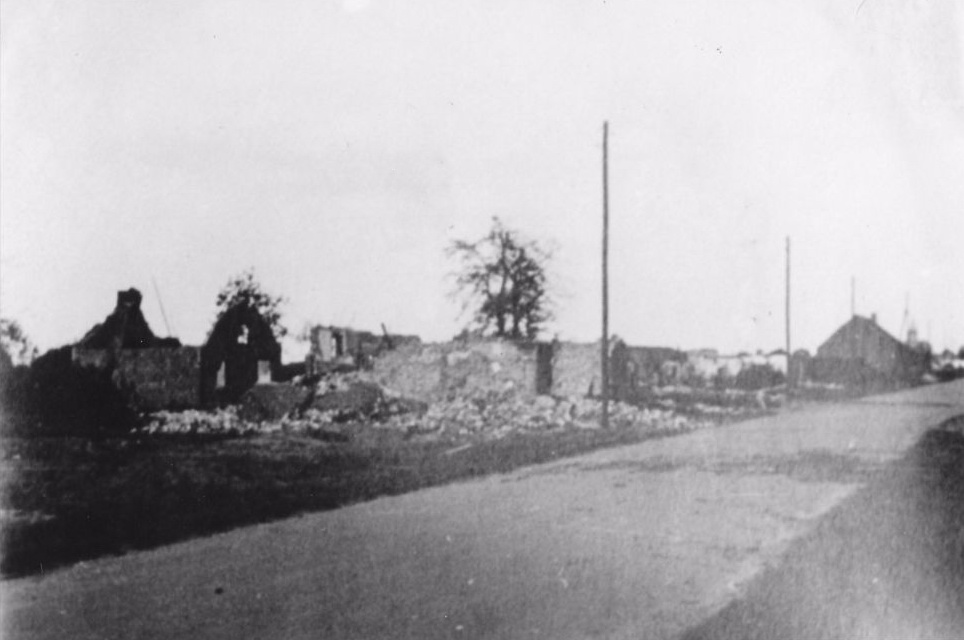 The Germans used the cavalry camp as a camp for political prisoners and criminals. A lot of them were send to concentration camps in Germany. On September 4 1944 the Germans transferred the to the Belgian , the Red Cross and the Fire Department. Everybody who still could was allowed to return home. On September 15 general Brian Horrocks gave the historic order, in the cinema Splendid (opposite the railway station), to all Commanders of the Land-forces who were taking part of the operation Market-Garden. They were given the mission to reinforce the airborne troops in Nijmegen and Arnhem, via the axis Lommel-Valkenswaard-Eindhoven-Vechel-Nijmegen. About this historical event the film ‘A Bridge too Far’ was made, with in one of the leading part the deceased Dirk Bogaerd.

As a result of the allied bombing of May 1944 the infantry camp was turned into a big mess. To clear away this debris collaborators were set in immediately after the liberation.

From 1947 until 1953 the rebuilding of five of the former sections of the infantry camp took place. Every section offered place for 600 to 800 men. Except for panzer troops and logistic units, also other units were temporally staying in the camp. Among them the battalion with Korea volunteers, the 8th Battalion of Engineers, the 1ste Para Battalion and the 21st Transmission Battalion were staying.

In 1970 Camp Beverlo became the garrison of the 1st Panzer Infantry Brigade. The Battalion Bevrijding (translated: liberation), the bearer of the traditions of ‘Brigade Piron’, arrived as first and the last units installed themselves in 1976. The barracks were modernised and hundreds of military houses were build for the families. Since the abolition of the compulsory military service and the withdrawal of all Belgian soldiers in Germany, Camp Beverlo’ became the biggest Belgian garrison. 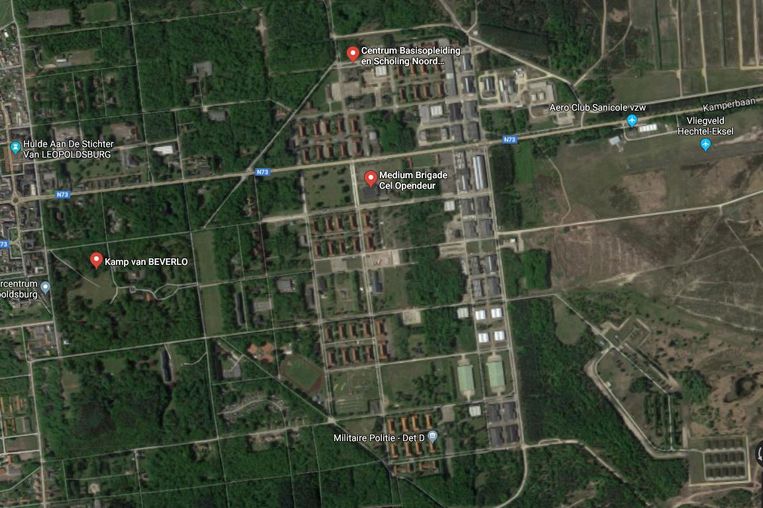 The barracks and part of the training grounds of Camp Beverlo