In Leopoldsburg we have a lot to offer. But we also have one and the other to eat and drink. I don’t want to talk about dishes like ‘Steppe grass’ that originated here, or the ‘piottenbol’, or Colletekes Rice-pudding, but three “real” local specialities: 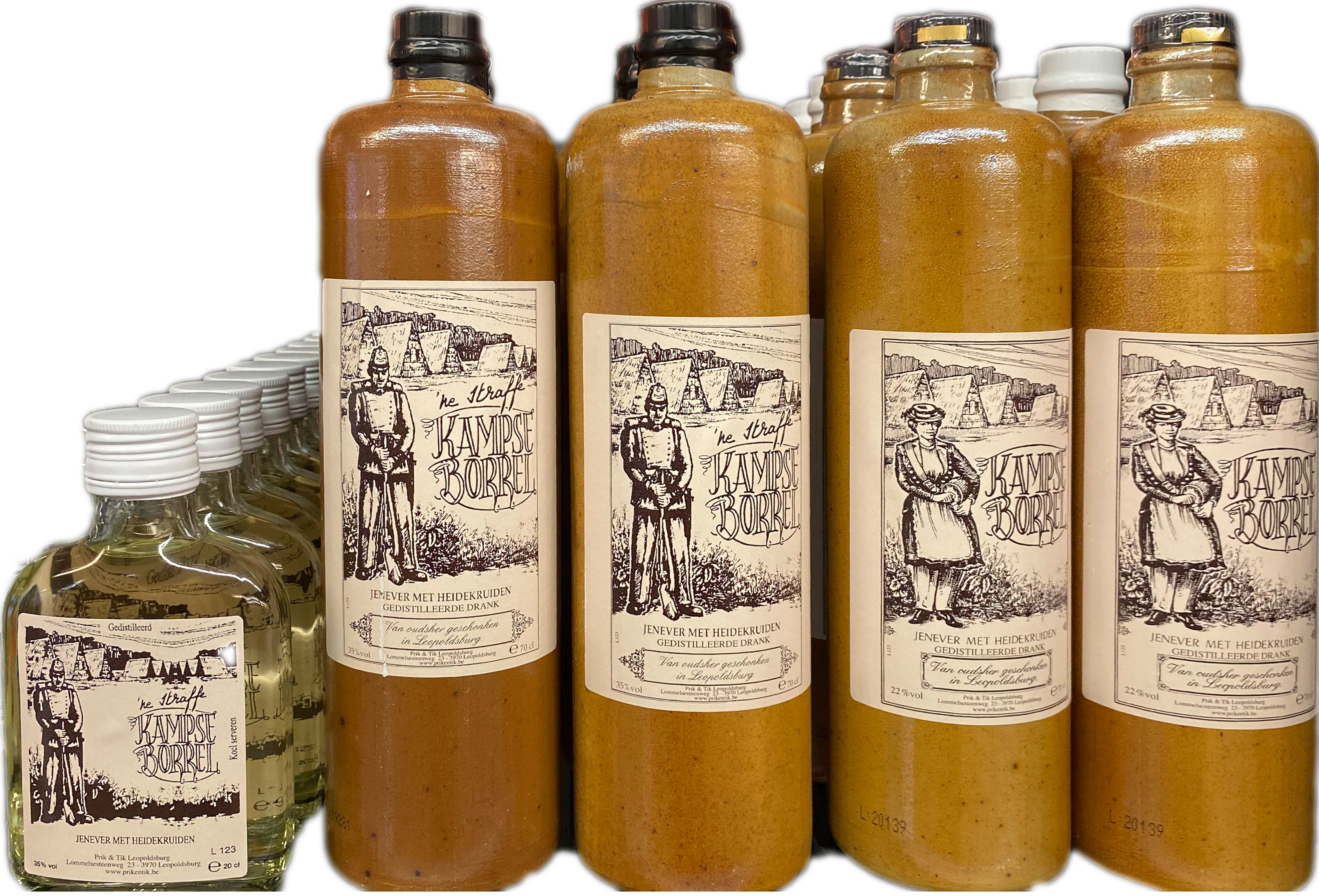 The ‘Kampse Borrel’ is a herbal gin of 35°, distilled from 5 different grains, in which 22 different natural herbs and plants are allowed to soak in for some time.

The name “Kampse” comes from the military camp of Leopoldsburg, which was founded in 1835 by King Leopold I in our beautiful Kempen, in Belgian Limburg. The area was poor but beautiful, with dunes, heather, pines, berries and … herbs.

The name “borrel” means gin, a drop, a whit. In fruit regions, a whitish was often flavoured by berries or fruits, but in Leopoldsburg they did that with the richness of the heather: fragrant herbs and medicinal plants.

The Kampse Borrel was then sold by the “marketentsters” (market girls). They were ladies of good conduct and morals who lived in the companies. In addition to her household activities, the marketentster was allowed to offer the “Kampse Borrel” for sale to the thirsty soldiers as an extra income. 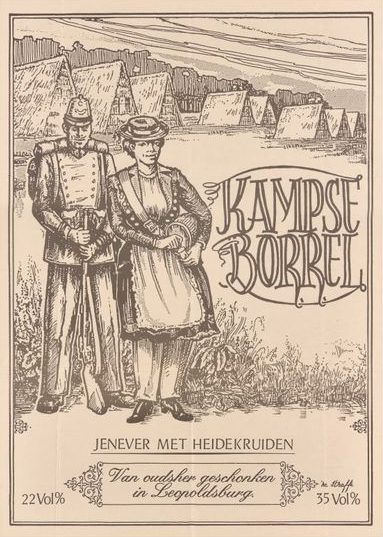 This tradition was lost around 1913. By a pleasant coincidence the original recipe was found in 1984 and since 1985 the “Kampse Borrel” has been restored. It is a source of fun and strength and … really from us.

Gourmet meat and fish dishes with “Kampse Borrel” are available: they are the creations of famous Belgian master chefs. 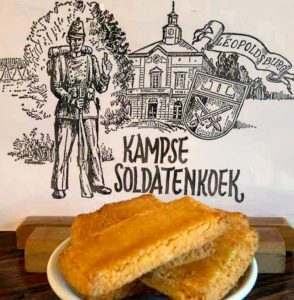 There is no doubt that anyone who has completed his conscription still remembers them. The rock-hard soldier’s cake. A few bakers from Leopoldsburg made their own variant that became a real delicacy.

The soldier’s cake is a hard, but very nutritious cake. With a military barracks in Leopoldsburg, its own regional variant could not be left out. It had to be a cake that the general public likes… And they succeeded with the “Kampse Soldatenkoek”!

On December 27, 2009 the beer “De Soldaat” was presented to the “Kampenaars” (inhabitants of Leopoldsburg). It was an 8.5% blond spicy beer with fermentation in the bottle. This beer came under the impulse of the late Ray Verpoorten. He thought that the typical soldier beer of yesteryear should not be missing in a garrison municipality. 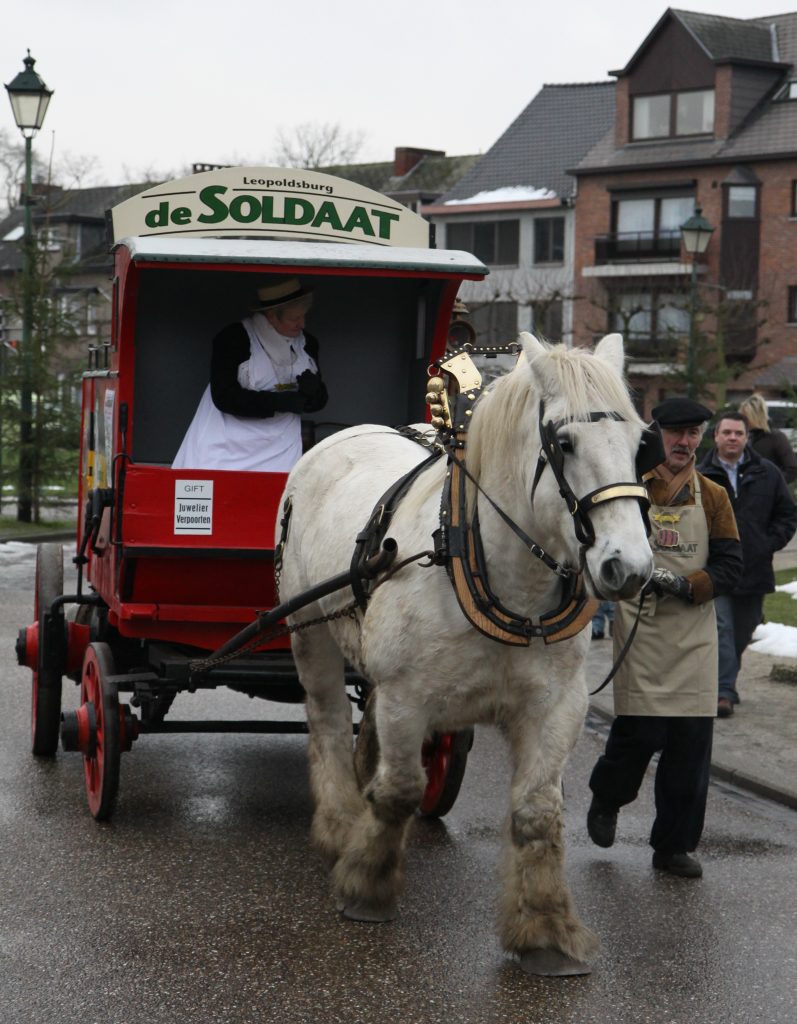 A team with an authentic beer cart stopped at the various cafes to distribute the first batch festively. The blonde beer was brewed according to an old Kempian recipe and was marketed by the Affligem Brewery, a former family brewery in Opwijk. There it was brewed exclusively for the tourist office. Prik & Tik Leopoldsburg takes care of the distribution.

The beer has been brewed at the Anders in Halen brewery since mid-2012. Since then it tastes slightly softer and the alcohol content reduced from 8.5% to 7%. 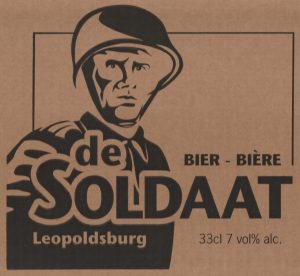 Over the years, the label was also slightly modified and now contains the image of a soldier.

With this beer Leopoldsburg now owns a trio of specialities!

Are you looking for the Kampse Borrel and / or de Soldaat? So keep in mind that these are exclusively available at

This site uses Akismet to reduce spam. Learn how your comment data is processed.