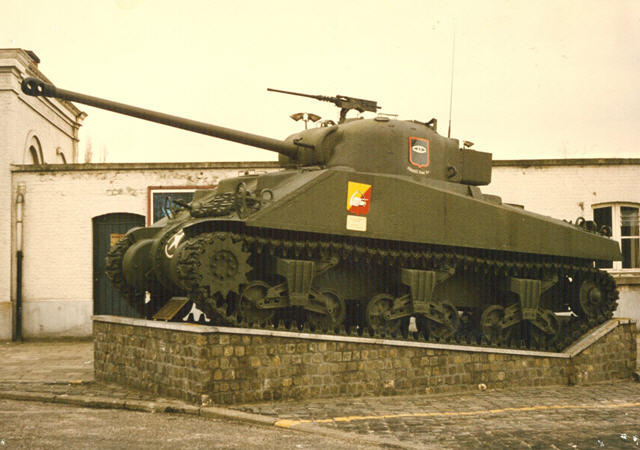 During the springtime of 1984 the president of the tradespeople, Ray Verpoorten, was attending the farewell parade of Lt Gen Dewandre of the Group Leopard (Groep Leopard). The general will become the president of the division tanks at the Royal Museum in Brussels. During the reception Verpoorten told the general that a village as Leopoldsburg should have a Sherman tank as a monument. The general agreed and promised a Sherman tank.
Later that year, Lt Col Van Thienen, than commander of Group Leopard, his successor Lt Col Pauwels W. and Cdt Geboers visited the Dutch driving-school and traction-school. Lt Col Van Thienen remembered the promise of the general and told this to Lt Col Pauwels. Pauwels assigned Cdt Geboers to fulfil that promise.
At that time Cdt Geboers was the commander of the Pl maintenance of Group Leopard and had all the necessary means for hoisting and renovating at his disposal.
Transport needed to be requested.
General Dewandre was reminded of his promise and he send a photo catalogue with all known tank-wrecks in Belgium. In this catalogue a tank, which was on the shooting range of Brasschaat, was appointed to be renovated and to become a monument in Leopoldsburg.

The next weekend a second attempt with personnel of Group Leopard was more successful. The Sherman was pulled out of the mud onto a sand track. The tracks, which were bend as an accordion between the track idlers, were cut in pieces by using the Sherman’s alternator. Now the Sherman could be pulled onto a flatbed trailer of the 1st Cie Mat and be transported to the Group Leopard in Leopoldsburg.

In the workplace the turret is placed next to the body. The damaged part of the barrel is burned off and replaced by a part of the recuperated barrel.
The engine, 5 x 6 cylinders, and all unnecessary parts are removed out of the body and sold to a merchant in old iron parts. With the profit the means for the restauration were bought, mainly grinding discs, and wired brushes for angle grinders and filler paste to mend the holes.
With the wire brushes all rust was removed, bulges were ground away.
Particular parts were imitated and welded. The welder performed miracles. He painted the turret and body with a firm priming coat and put three layers with zinc-bearing paint over it.
The turret was put back and was solidly anchored. 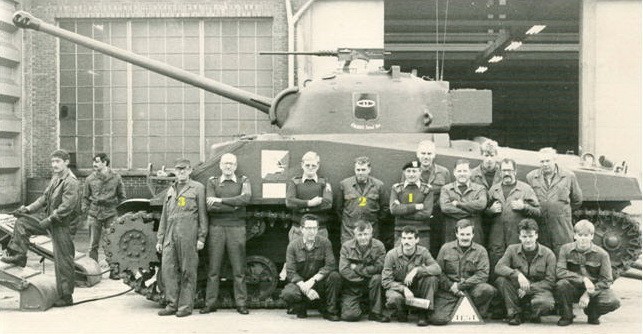 After two months of hard labour, the members of the Pl Maintenance of Group Leopard pose in front of “their Sherman”
Cdt Geboers (1), the welder CC Jadot (2), and the driver/operator of the Recovery Leopard CC Van Steenwinkel performed the biggest part of the work, mainly after working hours.

Three days later, on October 5 1984, at 18.00Hr, the Sherman was inaugurated by the Minister of Defence Vreven. Lt Col Pauwels W. received the honour of firing a final shot above the building, in which 40 years before that the English General Horrock had given the briefing for operation Market Garden. 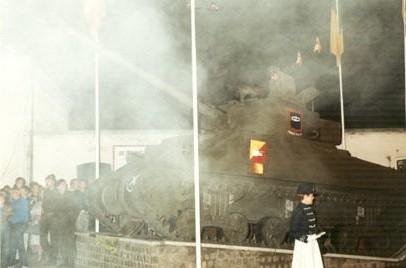 The welder who was sitting in the Sherman, brought the barrel back into a horizontal position and screwed it down.
He closed the turret hatch with a padlock and said good-bye to his Sherman.

Leopoldsburg was enriched by one monument. 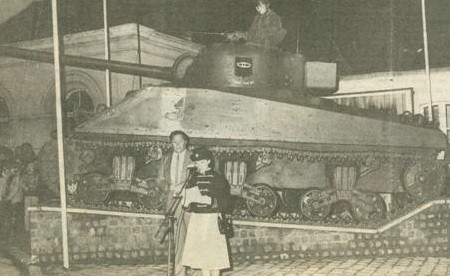